Balance the Power – Unite the People

A solution for the future status of Jerusalem is proposed, which fulfills all claims and aspirations of the Israelis and Palestinians, and also leaves the city undivided. The division of cities has hardly ever provided peace over the course of history.

This proposal for the status of Jerusalem is democratic and peaceful. It could therefore find acceptance and support throughout the democratic world and beyond.

Claims for the capital

Former U.S. Secretary of State Madeleine K. Albright (July 31, 2000) described the dilemma of Jerusalem: “This is a unique situation where two people want to have the same area and the same places, and have a call on saying the holy places are holy to each of them in different ways.”

“The Middle East peace talks collapsed Tuesday … after two weeks of intensive talks failed to resolve the critical issue of the future of Jerusalem. … Mr. Clinton had spent most of the last two weeks with Mr. Barak and Mr. Arafat in hopes of an accord to end more than 50 years of bitter enmity. He said Tuesday that “significant progress” had been made on “profound and complex questions that long had been considered off-limits” but that Jerusalem had proved the crucial stumbling block.”

The status of Jerusalem remains on the agenda of Middle East politics. The quartet – consisting of representatives of the United States of America, the European Union, the Russian Federation, and the United Nations – prepared the text for a performance-based roadmap to a permanent two-state solution to the Israeli-Palestinian conflict. It was presented to the government of Israel and the Palestinian Authority on April 30, 2003 (Annan, May 7, 2003). The status of Jerusalem is mentioned toward the end of the roadmap: “Parties reach … a negotiated resolution on the status of Jerusalem that takes into account the political and religious concerns of both sides, and protects the religious interests of Jews, Christians, and Muslims worldwide …”

Proposal for the status of Jerusalem

A proposal for the status of Jerusalem is described below (Hueck, September 27, 2000). The proposal draws on the idea of balancing power and uniting the people in such a way that the claims and aspirations of the different parties are fulfilled to the greatest extent, including freedom of access to the sacred places of the different religions.

One aspect of sovereignty relates to control over the territory, economy, and police as well as over law, jurisdiction, and administration. Two authorities can not share this territorial sovereignty.

Within an undivided Jerusalem Israelis and Palestinians could therefore both represent their independent sovereignty as outlined above. This would allow calling Jerusalem the capital of Israel and at the same time the capital of Palestine.

It is proposed to transfer the territorial sovereignty over Jerusalem to the people of Jerusalem. They shall elect an independent city parliament with two chambers as depicted in Figure 1. This city parliament shall maintain control over the territory, economy, and police as well as over law, jurisdiction, and the administration in Jerusalem. 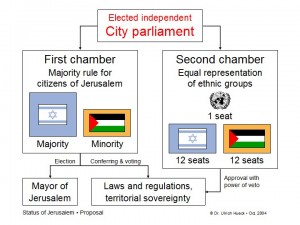 The members of the first chamber of the city parliament shall be appointed through majority rule. These representatives elect the mayor of Jerusalem. Furthermore, they confer and vote on laws and regulations concerning the city of Jerusalem.

To date, Jerusalem’s City Council has one chamber with 30 members, in addition to the mayor, who is directly elected. Any resident of the city may run for office and vote in the municipal elections (Jerusalem Municipality, 2003).

A particular clause shall exclude anyone from residing in Jerusalem, who attempts to violate or abolish the city’s peaceful democratic status.

The described proposal for the status of Jerusalem is democratic, peaceful, amazingly simple, theoretically sound and implementable. Israelis and Palestinians can benefit from the support that the proposal will find in the entire democratic world.

The practical implementation of the proposal requires that the negotiating parties show interest in considering the idea, further illustrative presentation and publication, political support from inside and outside of Israel and Palestine, as well as emphatic discussion and fair negotiations, whereas details of the proposal could be carefully adjusted.

The proposal “Balance the power – Unite the people” can lead to a profound and lasting agreement on the status of an undivided Jerusalem. It will contribute to the safety and security of people in the Middle East and beyond.

Annan K. A. (April 30, 2003). A performance-based roadmap to a permanent two-state solution to the Israeli-Palestinian conflict. Letter dated May 7, 2003 from the Secretary-General addressed to the President of the Security Council. Retrieved from https://www.un.org/unispal [expired]

Hueck, U. (September 27, 2000). Balance the power – Unite the people [Letter to the Editor]. The Jerusalem Post Internet Edition. Retrieved from http://www.jpost.com/Letters/7466.html [expired]

Jerusalem Municipality. (2003). Who are the members of the City Council? Can Arabs run for office? Retrieved from http://www.jerusalem.muni.il/jer_sys/publish/HtmlFiles/1616/results_pub_id=6708.html [expired]