The president today practically lives and acts like a king. 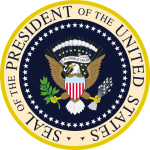 The President of the United States

A debate about the president of the United States of America should not only focus on the individual person, but also on how that person has been selected. The late U.S. Senator J. William Fulbright analyzed this matter:

“In a parliamentary system, the people who select the chief executive have often worked with him or her for twenty years or longer. Most prime ministers have had years of experience in parliament before becoming the leader of the government. To a considerable degree, the basis for their selection is the way they have performed their duties as members of parliament over that period. And those who choose them are those who work with them. They are selected by peer review, in marked contrast to our popular elections, where ninety-five percent of the people who select our leaders have only seen them on television.”

“Who indeed is likely to have a better judgment of the best candidate – those working with a potential leader for twenty years through parliamentary procedure, or the mass of voters forced to choose from the slickly packaged political products they see on television?”

The issue had already been considered doubtful during the founding of the United States of America:

“There are good reasons why the Founding Fathers were dubious about the direct election of the president. Madison’s plan would have had Congress elect the president, but the idea got lost in a compromise on the electoral college. There was almost no support among the framers for popular election of the president. A further, more informal method of peer review in the early years of the Republic was the selection of presidential candidates by the party caucuses in Congress, and by and large they came up with qualified candidates.”

Senator Fulbright also described a main difference between the role of a U.S. president and a prime minister:

“Perhaps the greatest difference between a president and a prime minister is that a prime minister in a parliamentary system must meet his peers and critics face to face; he must respond to criticisms, answer questions, endure the barbs and insults of the opposition. His presence in the House is not a state occasion filled with the trappings of ceremony and pomp associated with a president’s visit to Congress. It is this power of parliament to continually require the prime minister to explain and justify his policies to an informed body of colleagues that is crucial.”

“With all our much-praised checks and balances, we cannot confront a president head on. No president ever has to explain his views in detail, or reconcile them with criticisms or suggestions made by others.”

A reform of the procedure for the election of the U.S. president and the president’s role in the political system of the United States appears to be beneficial:

“The incoherence in our policy, our inability to face our problems, is a failure not just of individual leaders, but of the system itself.”

A two-thirds majority in both the Senate and the House of Representatives may deem a corresponding amendment to the United States Constitution [3] necessary.

Excerpts from THE PRICE OF EMPIRE by J. William Fulbright (1905–1995), pp. 59-63, ISBN 0-394-57224-6, copyright © 1989 by J. William Fulbright. Used by permission of Pantheon Books New York, an imprint of the Knopf Doubleday Publishing Group, a division of Penguin Random House LLC. All rights reserved. Any third party use of this material, outside of this publication, is prohibited. Interested parties must apply directly to Penguin Random House LLC [4] for permission.

Regarding these considerations about the President of the United States, you can submit comments privately by e-mail [5] or in public on Facebook [6].